This culture existed from 2800 BC to 2300 BC in Europe and until as late as 1800 BC in Britain. Later on it was succeeded by the Unetice Culture. Bell Beaker Culture was widely scattered throughout Western Europe, from various regions in Iberia and spots facing Northern Africa to the Danubian plains, the islands of Britain and Ireland, also the islands of Sicily and Sardinia. The Bell Beaker Culture follows the Corded Ware Culture and for north-central Europe the Funnelbeaker culture.

In its mature phase, the Bell Beaker Culture is understood as not only a collection of characteristic artefact types, but a complex cultural phenomenon involving metalwork in copper and gold, archery, specific types of ornamentation, and shared ideological, cultural and religious ideas. A wide range of regional diversity persists within the widespread late Beaker Culture, particularly in local burial styles (including incidences of cremation rather than burial), housing styles, economic profile, and local ceramic wares.

💀 In Eastern Denmark and Scania one-person graves occur primarily in flat grave cemeteries. This is a continuation of the burial custom characterising the Scanian Battle-Axe Culture, often to continue into the early Late Neolithic. Also in Northern Jutland, the body of the deceased was normally arranged lying on its back in an extended position, but a typical Bell Beaker contracted position occurs occasionally. Typical to Northern Jutland, however, cremations have been reported, also outside the Beaker core area, once within the context of an almost full Bell Beaker equipment. 💀 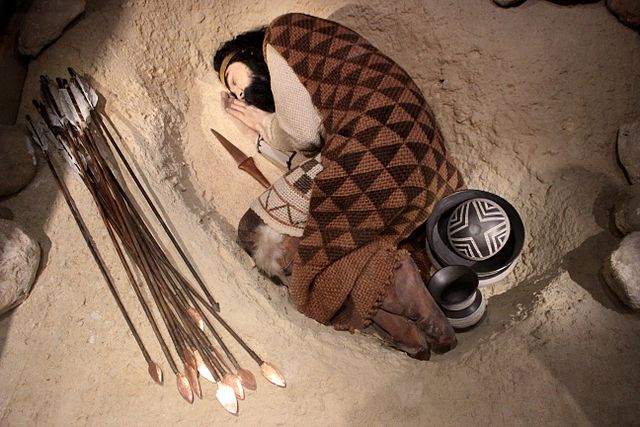 Noteworthy was the adoption of European-style woven wool clothes kept together by pins and buttons in contrast to the earlier usage of clothing made of leather and plant fibres.

Two-aisled timber houses in Late Neolithic Denmark correspond to similar houses in Southern Scandinavia and at least parts of central Scandinavia and lowland Northern Germany. In Denmark, this mode of building houses is clearly rooted in a Middle Neolithic tradition. In general, Late Neolithic house building styles were shared over large areas of Northern and central Europe. Towards the transition to LN II some farm houses became extraordinarily large. 🏞️

The Bell Beaker Culture is first to use the tree-trunk coffin burials. Later this practice was present in many Bronze Age European cultures like Únětice, Nitra, Mierzanowice, Unterwölblinger, Isar, Singen, Adlerberg, Wessex, Tumulus, Trzciniec, Otomani-Füzesabony and Věteřov. Manifestations of the funerary fashion on tree-trunk coffins also belong to the period II of the Nordic Bronze Age of Jutland. Investigations of burials in tree-trunk coffins cover mainly the regions of Britain, Northern, Northwest and Central Europe, but Eastern Europe absolutely fell out of them, although similar burials were also practiced there in the Bronze Age. This practice appeared commonly for the first time in the Eastern European Catacomb Culture (Babino Culture, 2000 BC - 1800 BC)[1].

R1b was detected in two male skeletons from a German Bell Beaker site dated to 2600 – 2500 BC at Kromsdorf, one of which tested positive for M269 but negative for its U106 subclade, while for the other skeleton the M269 test was unclear. In a 2015 study published in Nature, the remains of a later Bell Beaker male skeleton from Quedlinburg, Germany dated to 2296 – 2206 BC were analyzed. The individual was found to be carrying haplogroup R1b1a2a1a2. The study found that the Bell Beakers and people of the Unetice culture had less ancestry from the Yamnaya Culture than from the earlier Corded Ware Culture. The authors of the study took this to be a sign of a resurgence of the indigenous inhabitants of Western Europe in the aftermath of the Yamnaya expansion. 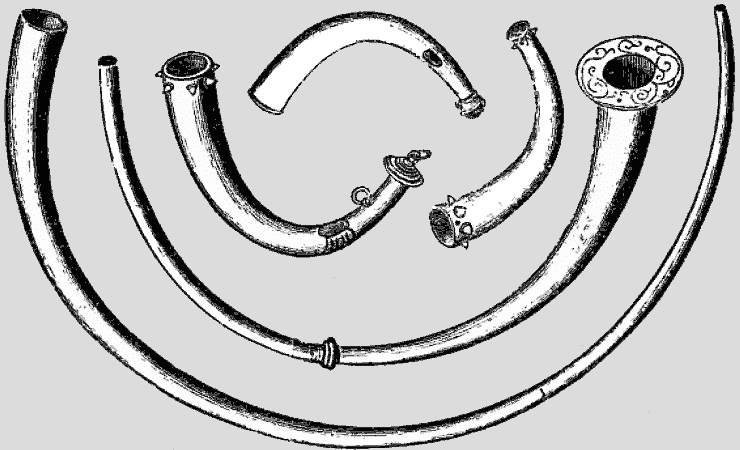 Another 2015 study published in Nature found the people of the Beaker culture to be closely genetically related to the Corded Ware Culture, the Unetice Culture and the Nordic Bronze Age. In yet another 2015 study published in Nature, the remains of eight individuals ascribed to the Beaker Culture were analyzed. Two individuals were determined to belong to Haplogroup R1, while the remaining six were determined to belong to haplogroup R1b1a2 and various subclades of it.

Ireland, Scotland, Wales and northwestern England are dominated by R1b-L21, which is also found in north Western France, the north coast of Spain, and Western Norway. This lineage is often associated with the historic Celts, as most of the regions where it is predominant have had a significant Celtic language presence into the modern period and associate with a Celtic cultural identity in the present day. It was also present among Celtic Britons in Eastern England prior to the Anglo-Saxon and Viking invasions, as well as Roman soldiers in York who were of native descent.

A study published in Nature in February 2018 confirmed that Bell Beaker males carried almost exclusively R1b, but the very first ones (in Iberia) had no Steppe autosomes or R at all.

A study from 2021 showed that R1b-L151 was a quite common Y-DNA haplogroup among the 2900 BC Corded Ware Culture males in Bohemia (Czechia in Central Europe) and those are the earliest examples of the R1b-L151 haplogroup later found among the Western Bell Beaker males[3]. But the Bell Beakers in Bohemia differ from the Bell Beakers of the British Isles, which means that they had to separate in one common place and that is the Rhine area near modern day Netherlands.

They entered the British Isles from Netherlands and then spread to Ireland. This resulted in a population shift and replacement of nearly 90% of Neolithic Farmer DNA on the Isles. Dords were used as an instrument in Ireland at this time.

Orkney was a major cultural center during the Neolithic from 3800 BC to 2500 BC. Farming flourished, permanent stone settlements and chambered tombs were constructed, and long-range contacts were sustained. Unlike elsewhere in Britain, there is little material evidence to suggest a Bell Beaker presence, suggesting that Orkney may have developed along an insular trajectory during the second millennium BC. Some male descendants (I2a1b-M423/I2a1b1-S185) of Neolithic Orkney may have remained distinct well into the Bronze Age, although there are signs that this had dwindled by the Iron Age. Furthermore, although the majority of mitochondrial DNA lineages evidently arrived afresh with the Bronze Age Bell Beaker invasion, there is evidence for continuity in the female line of descent from Mesolithic Britain into the Bronze Age and even to the present day[4].

There are 16 known Y-DNA haplotypes from Neolithic Orkney, of which 14 appear to be well resolved. All 14 belong to haplogroup I2a, of which seven are I2a1b-M423, four are I2a1b1-S185, one is I2a2-S33, one is I2a2a1b-CTS10057, and one is I2a2a1a2-Y3679 (the remaining two are poorly resolved I and I2). The two sampled males at the Iron Age Knowe of Skea site, also on Westray, belonged to the R1b-M269 lineage. In the Neolithic I2a1b-M423 was largely distributed in an arc around the Atlantic facade of Europe, from the Western Mediterranean to the Baltic. Outside Britain, most I2a1b-M423 lineages are from Middle/Late Neolithic Spain and France[4].

Orkney mtDNA T2a1b1 is seen in the German Corded Ware, whereas T2b21 matches German and Czech Bell Beaker lineages. While H39 and K1c2 lineages have not been seen in published ancient DNA data, the modern lineages are restricted to Northern Europe and date to around 3000 BC and 2600 BC, respectively, again suggesting a source in the Corded Ware expansion across Northern Europe around 3000 BC to 2500 BC. Several mtDNA lineages, such as J1c2*, K1a3a, H1n1, H58a, and H+195, are harder to resolve, but their distribution is in each case consistent with a Bell Beaker arrival, but might also come from the Neolithic. There were also two identical H1b lineages and one U5a1b1a, both of which can be attributed to either the Bell Beaker or the Corded Ware in Central Europe[4].

Bronze Age Orkney closely resembled other Northern European Bronze Age people in their overall genome-wide profiles and were highly distinct from Neolithic Orkney samples, which resembled more our Neolithic sample from Skye and other British and Irish Neolithic samples. Neolithic samples all lacked the Caucasus Hunter-Gatherer (CHG) component that most clearly signals admixture from the Yamna Culture Pontic-Caspian Steppe pastoralists (blue color). Modern Orcadians have an even higher fraction of the CHG component, reflecting medieval Norse settlement, estimated from modern genome-wide surveys at around 20% to 25% and around 25% to 30% of modern Y chromosomes[4].

The Orcadian Bronze Age samples could be plausibly modeled as 4% to 7% local Neolithic and 93% to 96% Scottish Bell Beaker populations, but also as 1% to 5% local Neolithic and 95% to 99% French Bell Beaker populations or 1% local Neolithic and 99% Danish Bronze Age populations. These results clearly imply very high levels of replacement of the Neolithic people by people related to continental Bell Beaker Culture immigrants by the Early Bronze Age, with only around 5% assimilation at most of the local autosomal gene pool. However, by the time the descendants of the Bell Beaker immigrants reached Orkney, they appear to have lost their Beaker cultural affiliation, as reflected in the dearth of Beaker-associated material culture in Orkney. This indicates that the Orkney Bronze Age was most likely settled via the British mainland (possibly the Eastern side) by people who arrived in Britain during the Beaker period[4].

Barrow cemeteries, some of the largest in Northern Britain, appeared in Orkney around 2000 BC. These earthen mounds contained multiple burials, added sequentially and most frequently comprising cremated remains in pits or stone-lined cists. Flat cist cemeteries were also in use for both inhumation and cremation burials, and often graves contained the remains of several individuals, but grave goods were infrequent. Material evidence of the Beaker complex seen across mainland Britain is scant in Orkney, a few pieces from two Beaker vessels were recovered from the wider area dated to 2265 BC - 1975 BC but no further pottery or recognizable artifacts have been found in association with the cemetery or settlement[4].

The Gaelic Irish clusters show the lowest ancestry proportions of German clusters, which in turn are thought to reflect Germanic/Saxon influence. Orkney shows the second-least Germanic proportion, with English clusters showing the most[5].

Roundhouses were the standard form of housing built in Britain from the Bronze Age throughout the Iron Age, and in some areas well into the Sub Roman period. The people built walls made of either stone or of wooden posts joined by wattle-and-daub panels, and topped with a conical thatched roof.

Lusitanian was spoken in the area between the Douro and Tagus rivers of Western Iberia (a region straddling the present border of Portugal and Spain). It is known from only five inscriptions and various place names. It is an Indo-European language and some scholars have proposed that it may be a para-Celtic language, which evolved alongside Celtic or formed a dialect continuum or sprachbund with Tartessian and Gallaecian. It is also possible that the Q-Celtic languages alone, including Goidelic, originated in Western Iberia (a theory that was first put forward by Edward Lhuyd in 1707) or shared a common linguistic ancestor with Lusitanian. Secondary evidence for this hypothesis has been found in research by biological scientists, who have identified (firstly) deep-rooted similarities in human DNA found precisely in both the former Lusitania and Ireland and (secondly) the so-called "Lusitanian distribution" of animals and plants unique to Western Iberia and Ireland. Both of these phenomena are now generally believed to have resulted from human emigration from Iberia to Ireland, during the late Paleolithic or early Mesolithic eras.

Early Man is a 2018 British stop-motion animated historical sports comedy film directed by Nick Park, the creator of Wallace and Gromit, written by Mark Burton and James Higginson, and starring the voices of Eddie Redmayne, Tom Hiddleston, Maisie Williams, and Timothy Spall. The film follows a tribe of primitive Stone Age valley dwellers, who have to defend their land from bronze-using invaders in a football match.