This culture existed from 1200 BC to 500 BC in the territory of Switzerland, Austria, Bavaria (Germany), Bohemia (Czech Republic), Northern Italy and Eastern France. It was preceded by the Unetice Culture and Urnfield Culture similar to the Lusatian Culture. The first Indo-Europeans settled in Switzerland around 2100 BC with the arrival of the Bell Beaker people from even earlier Corded Ware Culture. The Hallstatt Culture was followed by the Iron Age La Tène Culture.

It is named for its type site: Hallstatt - a lakeside village in the Austrian Salzkammergut Southeast of Salzburg, where there was a rich salt mine. Material from Hallstatt has been classified into 4 periods (Hallstatt: A, B, C and D).

The Lepontic Celtic language inscriptions of the area show that the language of the Golasecca Culture (1200 BC - 500 BC) was clearly Celtic, making it probable that the 13th century BC precursor language of at least the Western Hallstatt was also Celtic or Proto-Italo-Celtic. The Lepontic inscriptions have also been found in Umbria, in the area which saw the emergence of the Terni Culture, which had strong similarities with the Celtic cultures of Hallstatt and La Tène. The Umbrian necropolis of Terni, which dates back to the 10th century BC, was identical under every aspect, to the Celtic necropolis of the Golasecca Culture. A proof of a common origin of the P-Celtic, Umbrian, Oscan and Messapic languages and people will be revealead in DNA and vocabulary sections.

A genetic study published in the Proceedings of the National Academy of Sciences of the United States of America in June 2020 examined the remains of 5 individuals ascribed to either Hallstatt C or early La Tène Culture. The sample of Y-DNA extracted was determined to belong to haplogroup G2a-L497, while the 5 samples of mtDNA extracted were determined to belong to the haplogroups K1a2a, J1c2o, H7d, U5a1a1 and J1c-16261. The examined individuals of the Hallstatt Culture and La Tène Culture displayed genetic continuity with the earlier Bell Beaker Culture and carried about 50% Steppe related ancestry.

In 2020 Furtwängler et al. analysed 96 ancient genomes from Switzerland, Southern Germany, and the Alsace region in France, covering the Middle and Late Neolithic to Early Bronze Age. They confirmed that R1b arrived in those regions during the transitory Bell Beaker period from 2800 BC to 1800 BC. The vast majority of Bell Beaker R1b samples belonged to the R1b-U152 and R1b-L2 (from R1b-U152) clades (11 out of 14), the other being R1b-P312 (subclade of R1b-L11) and R1b-L51.

R1b-U152 would have entered Italy in successive waves from the Northern side of the Alps, starting in 1700 BC with the establishment of the Terramare Culture (1700 BC – 1150 BC) in the Po Valley. From 1200 BC a larger group of Hallstatt-derived tribes founded the Villanova Culture. This is probably the migration that brought the Italic-speaking tribes to Italy, who would have belonged mainly to the R1b-Z56 clade of R1b-U152. During the Iron Age, the expansion of the La Tène Culture from Switzerland is associated with the diffusion of the R1b-Z36 branch, which would generate the Belgae around modern Belgium and in the Rhineland, the Gauls in France, and the Cisalpine Celts in Italy[2].

Southern Italian populations show high similarity with those from the Middle East and Southern Balkans, while those from Northern Italy (Gauls, Italics, Umbrians) are genetically closer to populations of Northwestern Europe and Northern Balkans. Interestingly, the population of Volterra, an ancient town of Etruscan origin in Tuscany, displays a unique Y-DNA chromosomal genetic structure[2]. The North of Italy is dominated by R1b-U152 and R1b-S116 makes the second chunk of total R1b at around 15%. Corsican Y-DNA is differentiated by the high amount of R1b-M529 (the R1b-L21 abundant in the British Isles[3]), which appears only in Southern Italy and is absent in Northern Italy.

R1b-U106 (subclade of R1b-L11 found in Bell Beaker and Hallstatt samples) on the other hand is absent in Corsica and is quite common in whole Italy being the third R1b subclade. R1b-L23 (paternal to Yamnaya, Hittite and Albanian R1b-Z2103, but also to R1b-L11 and R1b-U106; most probably samples without deep subclades determined) appears in all regions and peaks at 25% in Sicily. R1b-M412 (direct subclade of R1b-L23 but brotherly to R1b-Z2103) makes up 60% of all R1b in Southern Apulia region (sole of the shoe) of Italy.

One common R1b subclade in Britain is R1b-U106, which reaches its highest frequencies in North Sea areas such as Southern and Eastern England, the Netherlands and Denmark but also Corsica. Due to its distribution, this subclade might be associated with the Anglo-Saxon migrations. Ancient DNA has shown that it was also present in Roman Britain, possibly among descendants of Germanic mercenaries.

Ireland, Scotland, Wales and Northwestern England are dominated by R1b-L21 (R1b-M529), which is also found in Northwestern France, the North coast of Spain, and Western Norway. This lineage is often associated with the historic Celts, as most of the regions where it is predominant have had a significant Celtic language presence into the modern period and associate with a Celtic cultural identity in the present day. It was also present among Celtic Britons in Eastern England prior to the Anglo-Saxon and Viking invasions, as well as Roman soldiers in York who were of native descent.

One interetsing fact is that the Y-DNA haplogroup of the Egyptian pharaoh Thutmose IV, Amenhotep III and his grandson Tutankhamun was R1b1a1b (R1b-V1636 that formed around 4600 BC). A male of the Botai Culture in Central Asia buried around 3500 BC carried R1b1a1 (R1b-M478) but and earlier Eastern European Hunter-Gatherer buried near Samara, Russia 5000 BC carried the R1b1a1a haplogroup. This would mean that the ancestor of the pharaoh Thutmose IV was an Eastern European Hunter-Gatherer.

A 1500 BC bronze metal hand found in Preles, Switzerland

Words below come mostly from Oscan, Umbrian, Latin, Welsh, Breton, Irish, Lusitanian and Gaulish languages. People carrying the R1b-L151 (R1b-L11) Y-DNA haplogroup were already in contact with people carrying the R1a-Z283 Y-DNA haplogroup in Bohemia, Czechia around 2900 BC. Words below could either be traced back to this time or even earlier times of paternal R1 haplogroup carried by all ancient Eastern European Hunter-Gatherers.

One of the oldest sentences from the Italo-Celtic branch comes from the Palestrina brooch in Italy: "Manios med fhe-fhaked numasioi", meaning "Manios me fashioned (created) for Numasios". The word "fhaked" is connected to English "fashion", in Latin and Faliscan it is "faciō", in Umbrian "𐌚𐌀𐌊𐌖𐌌 (fakum)" meaning "to do". 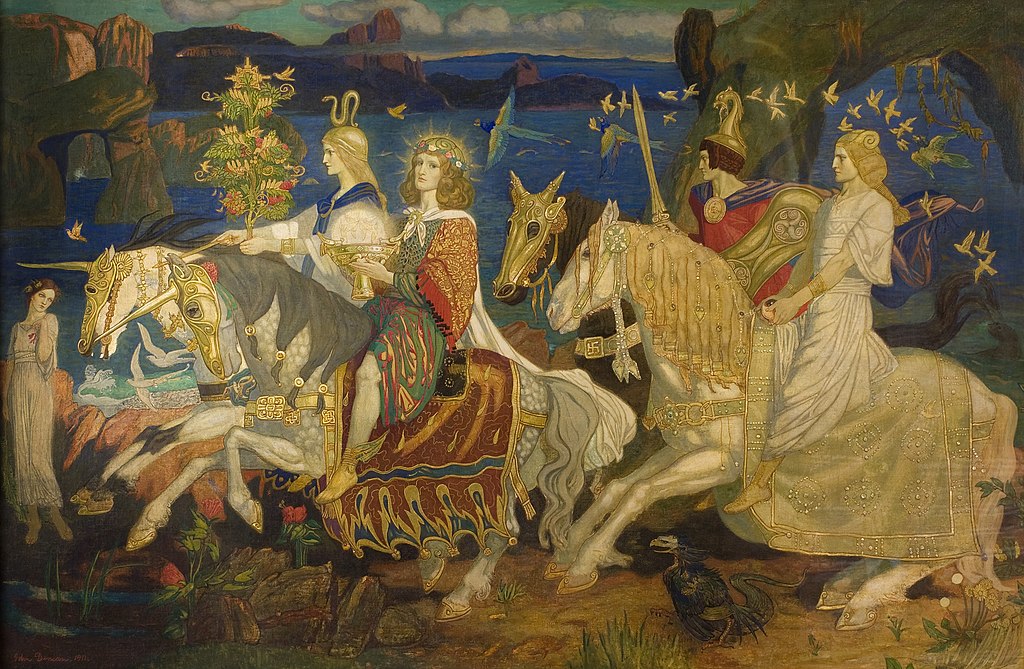 They might represent the final Indo-European tribes that invaded the British Isles and originated in the Hallstatt Culture. Their god of smiths was called "Govannon" in Wales, "Goibniu" in Ireland and "Gobanos" in Gaul, both names are related to Slavic verb "kovati" meaning "to strike" or "work in smithy" and Slavic name for a smith "koval".

Their main goddess was "Danu" (Dan, Dana, Dann, Don, Anu) and she is the same goddess as Hindu "Danu" (she was a mother of "Vritra"), in Latin the name for "Dunai" was "Danubius" and this river goes through the territory of Austria and Southern Germany (Hallstatt Culture in the past). Those names could be connected to Slavic "toń" meaning "depth" and verb "tonut'" and "tonąć" meaning "to drown".

The Dagda's name might be connected to a Cimmerian king Dugdamme (Tugdamme, Dugdam), whose name supposedly means "Good Giver". The Welsh word for "good" is "da" or maybe it is a very ancient word connected to Caucasian Hunter-Gatherer because in Ingush and Chechen languages it is "дика (dika)". The Cimmerians belonged to Y-DNA haplogroups: R1b1a, Q1a1 (ANE or Seima-Turbino), R1a-Z645 (R1a-M417), R1a2c-B111.

The Callanish Stones are cross-shaped setting of standing stones erected around 3000 BC and one of the most spectacular megalithic monuments in Scotland. The earliest Fomorians ("fo" + "mor" meaning "after plague") would then represent the Western European Hunter-Gatherer people who survived the bubonic plague. The first evidence for that disease appears in the Megalithic Funnelbeaker Culture around 2900 BC and even earlier in a Hunter-Gatherer population from Riņņukalns, Latvia around 3300 BC[4][5][6]. The names of Fomorians were for example: Balor (cognate is in Greek name "Βελλεροφόντης (Bellerophontes)" meaning "slayer of Belleros"), Conann, Bran mac Llyr, Febar, Buarainech, Cethlenn, Banba, Corb, Ériu.

A similar figure to Balor appears in the Basque myths: "Tartaro", "Tartalo". The story is similar to that of Odysseus and Polyphemus (Cyclops). Tartalo started to look for the boy, who blinded him, among his sheep, but he put on a sheep's skin and escaped. Tartalo got out of his cave and he started to run after the ring screaming ring worn by the boy. The young one wasn't able to take off the ring, so when he arrived to the edge of a cliff, he cut off his finger, and since Tartalo was near, he decided to throw it down the cliff. Tartalo, following the ring's shouting, fell off the cliff. Other evil one-eyed figure would be Cantabrian Ojancanu (Ohankanu) and female Ojancana. They were the embodiment of cruelty and brutality.

The second leader of second human invasion to Ireland (probably Bell Beaker Culture) was called Partholon and later his people died from bubonic plague. After him the Nemed came to Ireland from Scythia with his people on 44 ships. Later they were enslaved by the Fomorians and had to make offerings to them and perform human sacrifices. Then Morc waged war against them and only 30 Nemedians survived. Ireland became a wasteland for the next 200 years until they came back as Fir Bolg people ("Men of the Bags"). When Tuatha de Danann arrived, Cian with help of the female druid called Biorg saved the daughter of Balor - Ethlinn and then she had a son Lugh Lamhfada (the grandson of Balor), who killed his grandfather with a spear. The king of the Tuatha de Danann lost his right arm when fighting with Fir Bolg people and then he was killed by Balor in battle.

Finally the Gairthear Mílidh Easpáinne (Milesians) overthrowed the Tuatha de Danann and became the first human kings of Ireland, Fionn mac Cumhail was one of them but his grandgrandfather was Nuada from Tuatha de Danann.

The globalization stage started when DOM2 horses dispersed outside their core region in Ukraine, first reaching Anatolia, the lower Danube, Bohemia (Unetice Culture) and Central Asia by approximately 2200 to 2000 BC, then Western Europe and Mongolia soon afterwards, ultimately replacing all local populations by around 1500 to 1000 BC[7]. This would mean that also the horse-related Indo-European vocabulary (like Italian "equus", Irish "ech (ekh)", Celtiberian "ekua" or P-Celtic "epos" and "eb") became more widespread only after 2000 BC in Western Europe.

The large variability and repeated diminution in size of horses in the Early Bronze Age (2200 BC - 1700 BC) could indicate advanced domestication or multiple origins of the populations (or both). The persistence of wild horses in the Early Bronze Age can not be proved osteometrically, but the presence of domesticated horses is considered certain[8].