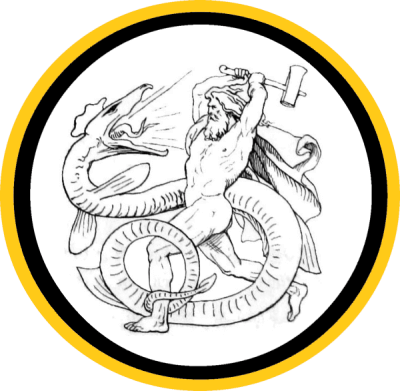 He is a son of MOTHER EARTH and the SKY FATHER. Thunder God carries an axe, a hammer, a mace or a sword.

He is the one that sends the rain and makes agriculture possible. The most important tree connected to him is an oak. His holy day is Thursday - the fourth day of the week.

He is the destroyer of the MIGHTY SERPENT.

His holiday is Midsummer.

Latin word for an oak "Quercus" was originally pronouced as "Perkus".

Latin word "percello (perkello)" means "I beat down, I overturn or upset, I strike or smite, I overthrow". This is the most similar Indo-European word to Finnish "Perkele" which is thought to be the original name of the Finnish Thunder God "Ukko". Ukkonen is the Finnish word for thunder and is the diminutive form of the name Ukko. Ukonkirves meaning "Ukko's axe" is the same as Lithuanian Perkuno kirvis meaning "Perkun's axe".

Luwian Tarḫunz could come from original Parkuns. Exactly that name "Parkuns" was mentioned in a Sudovian Book describing pagan Baltic Sudovians and their Thunder God. Lycian form of his name "Trkkas" proves that this middle H is indeed connected to K. If we also change initial T to P we get "Prkkas". Personal names referring to Tarḫunz, like "Trokondas", are attested into Roman times. Jupiter Dolichenus represented this Anatolian Thunder God later on.

Taranis was associated, as was the cyclops Brontes ("thunderer") from Greek mythology, with the wheel. Brontes was also a child of Gaia (MOTHER EARTH).

Latin word "procella (prokella)" means simply "thunderstorm" while Finnish "ukkonen" has the same meaning. From a lingustic point of view interesting seems that other Latin word for storm "tempestās" ends with a nominative ending "-ās" so common in modern Lithuanian language.

Horagalles or Thora Galles is a Sami Thunder God. He is also the god of the sky, the rainbow, weather, oceans, lakes and rules over human life, health and wellbeing. He punishes "hurtful demons" or "evil spirits" (trolls) who frequent the rocks and mountains, he destroys them with his lightning, shoots them with his bow, or dashes their brains out with his hammer. The rainbow is his bow called "Aijeke dauge".

When Semele asked Zeus to show her his true godlike form he appeared to her as pure lightning and stroke her dead.

In the language of Polabian Drevans recorded in 1795 by Jan Potocki the name for Thursday is Perunktao.

Cookies and other technologiesBy clicking "Accept" or continuing to use the site, you agree to the use of Indo-European Connection and third-party cookies and other similar technologies to enhance your browsing experience, analyze and measure your engagement with our content, and provide more relevant ads. You can withdraw your consent at any time.